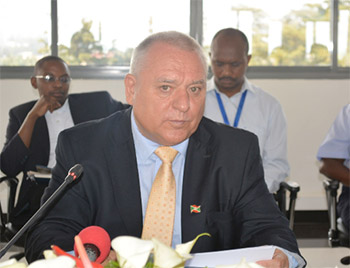 A transformational leader, that is what Mr Kieran HOLMES, the outgoing Commissioner General appears to be, after listening to the presentation he gave at his last press conference.

Assisted by the OBR Senior Management Team, the OBR Commissioner General started by giving a short presentation on what OBR has achieved since its inception to date both in terms of revenue collection and various other reforms introduced to facilitate trade. He added that when he joined OBR in June 2010, the administration had almost nothing by way of resources. There were no staff (only the executive and senior management team was appointed), a lot of corruption within the institution, most of the OBR activities were manual, there was significant resistance to change, no collaboration with the private sector and service delivery was extremely poor.

He had a lot to do to build the tax administration from scratch.

After an open and transparent recruitment of more than 400 staff, Mr Kieran Holmes worked with the EMT, SMT and advisers to design the first five year Corporate Plan of the OBR that will guide the institution for the future.

Initial support came first of all from the UK’s Department for International Development (DFID) and then from TradeMark East Africa which contributed USD23 million to the OBR in the period.

He also put all his efforts into the fight against corruption. As a matter of fact, a strict Code of Conduct was implemented and any OBR staff had to declare his/her assets every year. Internal rules and controls were also strengthened to fight against corruption and this has been a daily fight. As a matter of fact, The 2013 East African Bribery Index has scored OBR at 16.4 (a perfect score is zero) whereas in 2012 we scored 35.7. This is a 54% improvement in the bribery index and we even surpassed this year’s target score of 24, whilst it must be remember that revenue administration in Burundi was rated as the most corrupt in East Africa in 2010. This strong improvement in the Bribery Index sends a strong positive message to the community, our partners and to potential investors.

Many other trade facilitation initiatives have also been introduced such as the establishment of the Single Window for Business Registration, the creation of three new One Sop Border Posts (Kobero, Gasenyi and Ruhwa), the development of new tax procedures derived from new modern tax laws as well as the Authorised Economic Operator concept that has been piloted.

OBR has modernized the Human Resources Department and created a new organisational structure that responds to the current priorities. New training programmes have been developed, which is again extremely necessary in order to provide quality services to our clients.

In his closing remarks, the Commissioner General thanked the Government of Burundi for the trust to appoint him as the first expatriate to lead such an important institution, the Ministry of Finance, the Board, the staff, DFID, TMEA, USAID, IMF, WB, ADB, JICA, and all the diplomatic friends of OBR, particularly our Belgian colleagues who have provided constant and full support. He also thanked the media, taxpayers, the private sector, the civil society and many other key development partners.


After the presentation, the media representatives were given to ask questions and these were answered. At the end of the press conference, the common feeling was that a lot of progress has been made in the last four years, and with the good leadership of the Commissioner General, the atmosphere of trust and common purpose has really driven the OBR to the success it has demonstrated. We wish all the best to the next Commissioner General; we hope and expect that the positive trends will continue.